I know I said that I don’t usually take time to make my own recipes for Passover, given that the holiday is plenty of work already! 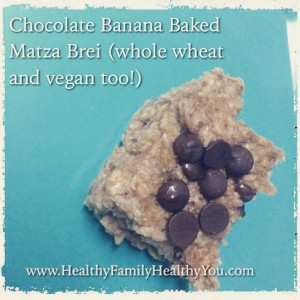 Heat oven to 350. Break up matza, place it in a mixing bowl and soak it in hot water until soft (at least 5 minutes). Drain carefully.

Place the mixture onto a cookie sheet lined with parchment paper. Spread it out with a fork so that the thickness of it is even throughout. You can also make it round and cut into pizza triangle shapes when it’s finished. Lightly sprinkle cinnamon on the top.

Take the pan out of the oven. Add the chocolate chips on top right away. The heat from the matzo brei will melt them. You can also use a knife or a fork to spread them around and help the process along. Cut into pieces and serve hot!